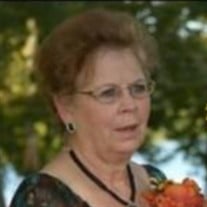 Barbara Kay Montgomery, age 77, of New Martinsville, WV, died Saturday, March 21, 2020 at her home. She was born December 8, 1942 in Wetzel County, WV, a daughter of the late Robert Braham and Maggie Henry Braham May. She was a homemaker... View Obituary & Service Information

The family of Barbara Kay Montgomery created this Life Tributes page to make it easy to share your memories.

Send flowers to the Montgomery family.