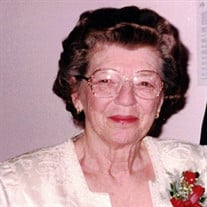 Betty Ruth Mercer Herrick, age 91, of Proctor, WV, passed away January 11, 2022, at the Good Shepherd Nursing Home, Wheeling, WV. She is now celebrating a heavenly reunion with her beloved husband, Clem, and precious daughter, June. She was born on September 15, 1930, in Tyler Co., WV. She was the daughter of the late William Mercer and Eliza Jane Whiteman Mercer. She graduated from Magnolia High School, Class of 1947. After high school, she was employed by C&P Telephone Company as a telephone operator before becoming the world’s best homemaker. Our mother was an amazing woman. She dedicated her life to her family and put their needs before her own. Not only did she care for her family, but she also lived a life of volunteer work. She was a member of St. Joseph’s Catholic Church, Proctor, where she served as a lector, sang in the choir, was both a CCD instructor and director. Mom also volunteered and served on various organizations such as The Wetzel County 4-H Club, serving as a leader, 4-H Advisory Board and 4-H All Stars. She worked with The New Martinsville Clothes Closet, and Magnolia High School Boosters. She also served 13 years as a Wetzel County Board of Education member from January 1980 – July 1993; 1984-86 as Vice President and 1990-92 as President. As a wife, she and dad worked to build a loving home and thriving farm for their family. As a mother, she led by example and instilled many values in her children and grandchildren. Through her endless patience, her family gained her knowledge and love of cooking, baking, canning, gardening, flowers, reading, music, and most importantly, being kind and giving. Mom never met a stranger and would talk with anyone she met. She had the gift of making you feel welcomed and well cared. You never left her home hungry or empty handed. In addition to her parents, she was preceded in death by her husband of 58 years Clem “Nestor” Herrick; a daughter, Catherine June Herrick; son-in-law, David William McGraw; one sister, Gertrude Mercer Snyder; and three brothers: Guy, Russell, and Bob Mercer. She is survived by 9 of her 10 children: Judy (Rudy) Fazzini of Wheeling, WV; Jane (the late David) McGraw of Proctor, WV; Joan (Scott) Henry of Albright, WV; Jackie Herrick of Wheeling, WV; Jeffery (Molly) Herrick of Petersburg, WV; Jake Herrick of Jacksonville, FL; Janet (Adam Hoyles) Herrick of Jacksonville, FL; Jerry (Rosie) Herrick of Wheeling, WV; Jennifer (Todd) Fox of Mason, OH. Grandchildren: Tony (Emma) Fazzini, Jason (Heather) McGraw, Phillip (Pam) Fazzini, Amy (Don) Cooley, Logan Miller, Ian Miller, Rebecca Herrick, Nicholas Herrick, Lucas Herrick, Katie Herrick, Lucy Lou Herrick, Ethan Fox and Tyler Fox. Great Grandchildren: Liam, Abigail & Lillian Fazzini; Luciano, Sophia & Adriana Fazzini; Quentin & Jaden Thomas, Cassara, Alexis & Hunter Cooley and Slade Damron. There will be a private family viewing at Grisell Funeral Home and Crematory, 751 Third Street, New Martinsville, WV on Friday, January 14, 2022. A Catholic Funeral Mass will be celebrated on January 15, 2022, beginning at 11:00 am at St. Joseph’s Church, Proctor, WV, with Monsignor Kevin Quirk as celebrant. Interment will follow in the St. Joseph’s Church Cemetery. In lieu of flowers, friends are encouraged to make a memorial donation in Betty’s name to the Good Shepherd Nursing Home, 159 Edgington Lane, Wheeling, WV 26003. The impeccable care our mother received under the loving watch of the staff of Good Shepherd Nursing Home will never be forgotten by our family.

The family of Betty Ruth (Mercer) Herrick created this Life Tributes page to make it easy to share your memories.

Send flowers to the Herrick family.