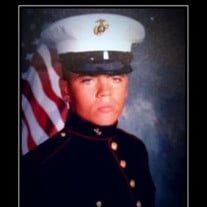 Brian Keith Sites, age 50 of Moundsville, WV, passed away Thursday, December 17, 2020 at Ruby Memorial Hospital in Morgantown, WV. He was born November 14, 1970 in Gainesboro, VA., the son of the late James S. Sites and Martha A. Sites. He was raised in Capon Bridge, WV. until he left for the military. Brian, joined the US Marine Corps in April 1989 and attained the Rank of Staff Sergeant, where he served as a Howitzer Section Chief for 9 years with Charlie Battery, 1st Bn, 10th Marines, 2nd Marine Division and in 1st Bn, 12th Marines, 3rd Mar Div. During his tenure in the Marine Corps, Brian served around the globe and most recognizable was a combat deployment during Operation Desert Storm from Aug 1990 – Feb 1991. During his career, Brian was seen as a natural born leader showing qualities such as dedication, mentorship, selflessness and accepted nothing less than perfection out of the Marines under his charge. Brian, earned and received numerous individual and unit awards and most notably he was awarded the Navy and Marine Corps Achievement Medal, Marine Corps Good Conduct Medal w/1 Star, Kuwait Liberation Medal and the Southwest Asia Service Medal. Brian worked at MarkWest Petroleum MPLX in Majorsville, WV. He was a Board Operator. He loved his job! He made many friends at his workplace that he considered family as well. In addition to his parents, he was preceded in death by his sister, Martha, “Missy” Layton. Survivors include his wife and son, Beverly A. Sites and Hunter J. Sites of Moundsville, WV. His son Trevor S. Sites of Moorefield, WV. His daughter Ashly N. Sites of Petersburg, WV., His brothers James C. “Buddy” Sites and his wife Rosemary of Winchester, VA., and David W. Sites and his wife Mary of Winchester, VA. Along with four grandchildren, Noah S. Sites Jr., Steven B. Sites, Gracelynn M. Sites, and Keith R. Sites. As well as many family, friends, and USMC Brothers that loved him dearly. A celebration of life will be held at a later date. All who loved him will be invited to attend, with details to come. Memorial contributions can be made to his Go Fund Me Account. Arrangements entrusted to Grisell Funeral Home & Crematory, Moundsville

The family of Brian Keith Sites created this Life Tributes page to make it easy to share your memories.

Send flowers to the Sites family.