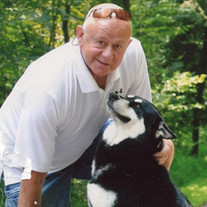 C. Michael “Mike” Blair, age 79 of Glen Dale, WV died Wednesday, May 11, 2022 in Wheeling Hospital Medical Park, Wheeling, WV, with his family by his side. Mike was born September 29, 1942 in Glen Dale, the son of the late Deane and Dorothy Newman Blair. He graduated from Linsly Military Institute in Wheeling and received his Master’s Degree from West Virginia Wesleyan; he served with the US Army Reserves; was Bank President with the former Mercantile and BB&T Banks; attended The Experience Church; was a member of Glen Dale United Methodist Church, Marshall Union Lodge #8 AF&AM, Scottish Rite of Wheeling; Osiris Shrine of Wheeling; R.O.J. Court #13, and a Rotary Club Member. Mike was so proud of and loved being a “Pa” to his grandkids; he enjoyed having coffee and a cigar on his porch; watching birds; was an avid hunter and fisherman, and loved going to his camp out Fish Creek in “Millsboro”. In addition to his parents, he was preceded in death by a sister, Sarah Deane; and his beloved dog, Nikki. Survivors include his wife of 54 years, Linda Blair; two children, Kim Blair of Mt. Pleasant, SC, and Zack (Richelle) Blair of Glen Dale; five grandchildren, Luke, Jake, and Sam Hoffman, and Camryn and Cooper Blair; a brother, Joe Blair of Glen Dale; a sister, Mary Jane (Bill) Willis of Smyrna, DE; several nieces and nephews; and a brother-in-law, Marty (Syd) Finney of Evansville, IN. Family will receive friends on Sunday from 2-6pm and Monday from 12noon until time of Funeral Service at 1pm at Grisell Funeral Home & Crematory, 400 Jefferson Ave., Moundsville with Tim Seidler officiating. Private interment will be held at the convenience of the family. Memorial contributions may be made to Marshall County Animal Shelter, 37 Animal Shelter Dr., Moundsville, WV 26041.

The family of C. Michael "Mike" Blair created this Life Tributes page to make it easy to share your memories.

Send flowers to the Blair family.