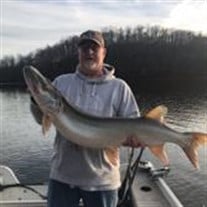 Charles E. L. Booth, age 54, of New Martinsville, WV, passed away Friday, April 10, 2020 at his home. He was born December 23, 1965 in New Martinsville, WV a son of Madlyn “June” Lancaster Booth and the late Charles “Bud” Edward Booth He was employed as a welder for the International Brotherhood of Boilermakers Union Local 667, a Licensed Professional Land Surveyor, and a member of the First Christian Church, New Martinsville. Charles was an avid fisherman, he loved to catch and release musky. Survivors include his wife, Lisa Booth; two sons, Ryan Lowe and Jack Booth, both of New Martinsville; his mother, June Booth of New Martinsville; a brother, Steve (Jane) Booth of Sidney, OH; a sister, Amie (Robert) Honeman of Gaffney, SC; two grandchildren, Ireland Sky Lowe and Draven T. R. Lowe and a nephew, Hunter Booth. Private services will be held at the convenience of the family with a memorial service to be held at a later date. The family knows there are many friends and relatives who would like to pay their respects, and apologize that the current situation mandates the service be limited to the immediate family only. Arrangements entrusted to Grisell Funeral Home & Crematory, New Martinsville.

The family of Charles E.L. Booth created this Life Tributes page to make it easy to share your memories.

Send flowers to the Booth family.