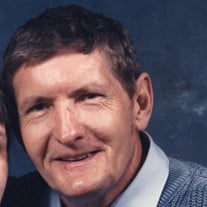 Clair Phillip Dawson Sr., age 82 of New Martinsville, WV passed away Thursday November 8, 2018 at Wetzel Co. Hospital. He was born October 19, 1936 in Wetzel Co, the son of the late Wilbur Guy and Mary Highley Dawson. He was a... View Obituary & Service Information

The family of Clair Phillip Dawson Sr. created this Life Tributes page to make it easy to share your memories.

Send flowers to the Dawson family.