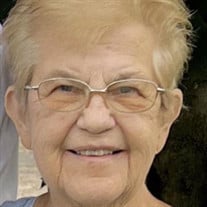 Doris A. “Nan” Fannin, age 78 of New Martinsville, WV, passed away Wednesday, October 13, 2021 at WVU-Wheeling Hospital, Wheeling, WV. She was born December 27, 1942 in New Martinsville, the daughter of the late Liss and Mary C. Moffit Fluharty. Whether you knew her as Mom, Nan, Aunt Punky or “that” councilwoman, she welcomed everyone she ever met, was smart, quick witted, enjoyed laughing and making others laugh as well, was the rock of the family, and cared for everyone. She was the Branch Manager at Atlas Insulation and on the Board of Directors, was a very active supporter of Magnolia Basketball, and a Christian by faith. In addition to her parents, she was preceded in death by her husband, George Fannin, Jr. in 2000, two brothers, John Fluharty and his wife, Rosie and Jim Fluharty; two sisters, Fannie Dennis and Peg McKelvey and her husband, Jim. Survivors include three daughters, Lissie (Steve) Howell, Cami (Rich) Williamson, and Jodi Fluharty all of New Martinsville; four grandchildren, RJ Goode, Sami Fluharty, Tyler Williamson, and Trevor Williamson; a sister, Judy Heasley of New Martinsville; and several nieces and nephews. Family will receive friends on Tuesday from 2-4pm and 6-8pm at Grisell Funeral Home & Crematory, 751 Third St, New Martinsville, where funeral services will be held Wednesday, October 20, 2021 at 11am with Pastor Steve Stewart officiating. Interment in Northview Cemetery, New Martinsville, WV. Memorial contributions can be made to the Magnolia Boys Basketball Roundballers program, c/o Bayer Credit Union, or the charity of the donor’s choice.

The family of Doris "Nan" Ann Fannin created this Life Tributes page to make it easy to share your memories.

Send flowers to the Fannin family.