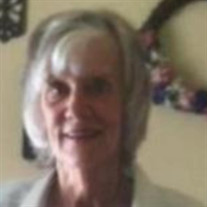 Not sure what to send?

Elizabeth A. Jaworski, age 83 of Moundsville, WV died Wednesday, April 27, 2022 at Stonerise Health Care Center, Moundsville. She was born August 8, 1938 in Moundsville, the daughter of the late Bill and Rozella Elizabeth Stevens Westen. She was a graduate of Moundsville High School; a retired LPN from Reynolds Memorial Hospital, having worked for 20 years; a very active member of Calvary United Methodist Church, where she was a member of the choir; and she worked and donated her time at 4-Seasons Pool. In addition to her parents, she was preceded in death by her husband, Tom Jaworski; a daughter, Carolyn Hammermiller; and two sisters, Joretta Porter and Rachel Cross. Survivors include a son, Tom Jaworski of Hilliard, OH; grandchildren, Katherine (Josh) Griffin and Stephanie (Danny) Hammermiller; great-grandchildren, Hudson and Peyton; one brother, John (Donna) Westen of Clearfield, PA; one son-in-law, Alan Hammermiller; several nieces and nephews including a niece Winona Porter. Graveside Services and Interment will be held Wednesday, May 4, 2022 at 12noon at Greenlawn Cemetery, Moundsville. A Memorial Visitation will be held Saturday, July 16, 2022 from 10am until time of Service at 11am at Calvary United Methodist Church, 1601 1st Street, Moundsville with Rev. Annette Carper officiating. Arrangements entrusted to Grisell Funeral Home & Crematory, Moundsville.

The family of Elizabeth A. Jaworski created this Life Tributes page to make it easy to share your memories.