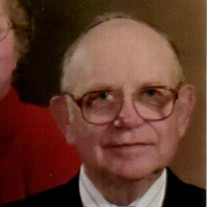 Emerson J. Straub, 91, of Sardis, OH passed away October 16, 2021 at Westwood Place in Woodsfield, OH. He was born August 26, 1930 to the late John and Mary Winkler Straub. After graduating from Hannibal High School Emerson began making his living as a farmer on the family farm where he continued farming his entire live. He served in the Army and when he returned home he began to work at Conalco Aluminum company where he was employed for 31 years. He was a dedicated member of Zion United Church of Christ for his entire life where he taught Sunday School and served on the church council for many years. Emerson enjoyed traveling both in the US as well as several trips to Switzerland to visit the area where his ancestors were from. He also was an avid hunter and fisherman and enjoyed fishing trips to Seneca Lake, Lake Erie, Cape Cod, South Carolina and Canada. In addition to his parents, Emerson was preceded in death by brothers Wes, Sam, and Roy Straub and sister Anna Kernen. Emerson was a loving husband, father and grandfather, who is survived by his wife of 64 years, Florence (Berger) Straub, daughter Kathy Straub of Indianapolis, son Wayne and daughter-in-law Kim Straub of Sardis, granddaughters Hannah and Tabitha Straub of Sardis, sister-in-law Janet Straub of Sardis, and many nieces, nephews, friends and loved ones. Family will receive friends on Tuesday, October 19 from 4pm – 8pm at Grisell Funeral Home 125 Clarinda Dr. Clarington, OH where services will be held on Wednesday, October 20, at 2:00 pm with Pastor Rick Lynch officiating. Interment will follow in Zion Memorial Garden, Sardis OH. Memorial contributions may be made to Zion Memorial Garden, c\o Kimberly Rufener, 42198 Homer Reef Rd., Sardis, OH 43946

The family of Emerson J. Straub created this Life Tributes page to make it easy to share your memories.

Send flowers to the Straub family.