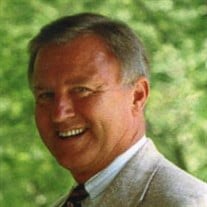 George Charles Hughes, III, “Charlie”, age 81, a resident of Glen Dale, WV died Wednesday, December 9, 2020 in Mound View-Stonerise Health Care Center, Moundsville. He was born November 25, 1939 in Moundsville, the son of the late George Charles, II “Chauncey” and Dorothy Mudge Hughes. Charlie was a member of Trinity Episcopal Church, where he served as a member of the Vestry and a licensed Lay reader. He graduated from Moundville High School in 1957, and the same year, received an appointment from then Congressman, Arch A. Moore, Jr. to the Merchant Marine Academy in Kings Point, NY, where he graduated in 1961 Summa Cum Laude. He then attended West Virginia University College of Law, where he was an honor’s graduate and member of the Board of Editors of the WV Law Review. He was a partner with Gall, Madden and Hughes Attorneys At Law, Moundsville; then Partner Madden and Hughes; later, Madden, Hughes, and Whorton; and in 1982, Senior Member G. Charles Hughes, L.C; and was Licensed with Supreme Court of Appeals of WV, United States District Court for the Northern District of WV, and the US Court of Appeals for the Fourth Circuit. His Professional Appointments include Assistant Prosecuting Attorney for Marshall County, WV; President of Marshall County Bar Assoc.; Board of Governor’s WV Trial Lawyer Assoc., where he served as past President. A Member of The WV Legal Services Corp.; a committee member on Codification of the WV Rules of Evidence; was 1 of 9 members of WV State Bar Committee on Legal Ethics. A Lawyer member of Legislative Interim Committee for Medical Malpractice Reform; WV Board of Review; Committee for Proposed Amendments to the WV Rules of Civil Procedure; West Virginia Board of Law Examiners; a 1 of 250 in the USA, Plaintiffs’ Litigator Participant; a member of The Civil Litigation Project, and WV Law Institute. His Professional Memberships and Associations include WV State Bar Assoc., WV Trial Lawyers Assoc., Mountain State Bar Assoc., American Bar Assoc., Assoc. of Trial Lawyers of America; Defense Research Institute, WV University Law School Assoc., WV Bar Assoc., and Marshall County Bar Assoc. During his life, he received many awards. His Professional awards include, WV Trial Lawyers Assoc. Extraordinary Service Award and Lifetime Achievement Award, Blackstone Club Most Valuable Presentation Award, and Mountain State Bar Assoc. Life Member and Distinguished Service Award. Civic Awards include; Marshall County Recreation Board Distinguished Service Award, Friends of Marshall County Employees Award, Elected to Marshall Co. Commission from 1974-1980 and received Marshall County Commission’s Distinguished Service Award, City of Cameron, WV Long-time Counsel and Honorary Citizen Award, Marshall-Wetzel-Tyler Central Labor Council Award, and AFL-CIO Outstanding Citizen Award. Charlie’s Community Service included President of Rotary Club and Cancer Society, involvement with Boys Baseball and Community Days, where he was past Commissioner; worked with Sam Yanen on the Moundsville Tree Project, a past member of Marshall County Park and Recreation Board and Commission for Student Government Day. He was a frequent lecturer on Insurance Bad Faith Litigation and successfully argued a broad spectrum of legal issues including insurance, employment, Mandolidis, and a variety of other tort and contract cases before the WV Supreme Court of Appeals. His practice was not limited to State Court, as he appeared before the US District Court of Appeals Fourth Circuit. Charlie felt privileged and very proud to have worked with many esteemed colleagues, including Stanley Preiser on achieving the first million dollar award in the State of WV, as well as consultation with Justice Cleckley regarding his book, “Handbook on Evidence”. He loved his family, the “Written Word”, music, and so much more. In addition to his parents, he was preceded in death by his brother, Michael Hughes. Survivors include his wife of 28 years, Kathleen; two sons, Chad (Diane) Hughes of Durham, NC, and Justin (Katie) Hughes of Atlanta, GA; a daughter, Molly Hughes (James) Lavino of Philadelphia, PA; a step-daughter, Jennifer Farabaugh of Boston, MA; six grandchildren, Cody, Skyler, Eliza, Mills, Olivia, and Owen; and a brother, Joseph Hughes of San Francisco, CA. The family would like to thank Dr. Robert Wade, the staff of Mound View Health Care, and the many caregivers and others, over the years that provided care and support. The care given to him was excellent. Charlie was grateful to Bob Fitzsimmons, who was more than a friend. In honoring Charlie’s wishes, there will be no visitation and due to the COVID-19 pandemic, a Memorial Service will be held at a later date. Memorial contributions may be made to the American Heart/ Stroke Assoc., PO Box 417005, Boston, MA 02241. Arrangements entrusted to Grisell Funeral Home & Crematory, Moundsville.

The family of George Charles "Charlie" Hughes III created this Life Tributes page to make it easy to share your memories.

Send flowers to the Hughes family.