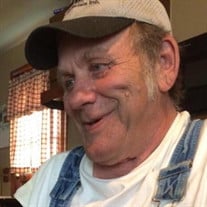 Harry Brent “Jack” Wagner, 74, of Moundsville, West Virginia, passed away on March 19, 2020 at home surrounded by his family as he listened to classic country music. He was born on September 27, 1945, in Glen Dale, WV, the son of Harry and Dorothy Jean (Kimble) Wagner. In addition to his parents, he was preceded in death by his stepmother, Dorothy Gail Wagner, a brother, Gerald Gray, a sister, Judy, and a brother-in-law, Encil Johns. Harry was a Protestant by faith and is survived by his wife of 55 years, Mary, who cared tirelessly for him “in sickness and in health” during his eight-month battle with cancer. He was the father of five children: Brenda Wilkerson (Fred) of Moundsville, WV, Jackie West (Steve) of Moundsville, WV, Mary Lou Yoho (Patrick) of Wheeling, WV, Archie Wagner (Becky) of Moundsville, WV, and Johnny Wagner (Jeanine) of Temecula, CA. Harry was “Pap Jack” to eleven grandchildren who could always count on him for a good laugh: Dalis, Dylan, Jacob, Brian, Taylor, Alex, Zach, Randy, Marisa, Hayden and little Jack, as well as two great-grandchildren, Brooklyn and Mackenzie, and five step-grandchildren: Steven, Tony, Joey, Abby, and Jacob. He is also survived by two brothers, Joe Wagner (Debbie) of Moundsville, WV and John Wagner (Alana) of Edgewater, FL and a sister, Janet Richards (Bill) of Moundsville, WV, along with several nieces and nephews. And, not to be forgotten, his pug Cash, who he treated like a baby. Jack was a hard worker and spent the last 32 years driving for Klug Brothers in Moundville up until his illness. He looked forward to shining up “Old 22” every spring. He started every morning sipping a cup of coffee with his friends at the Huddle House, and eagerly awaited the WV Daily 3 drawing every night to see if his numbers made him a winner. Jack was a die-hard Pittsburgh sports fan whose Sunday plans were always scheduled around the Steelers kickoff time. The family wishes to thank Mike and Theresa of the Wheeling Hospital VNA for the constant hope they gave to Jack, as well as Valley Hospice for their guidance and care during the final weeks of Jack’s life. Funeral and graveside services will be held Saturday at 2pm at Riverview Cemetery, Moundsville.

The family of Harry Brent "Jack" Wagner created this Life Tributes page to make it easy to share your memories.

Send flowers to the Wagner family.