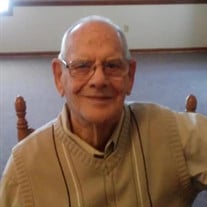 Herbert Paul Harris, age 93 of Moundsville, WV died Friday, January 21, 2022 at home. He was born November 9, 1928 in Glen Easton, WV the son of the late James Ray and Mary Horner Harris. He was a US Army Korean War Veteran; and a... View Obituary & Service Information

The family of Herbert Paul Harris created this Life Tributes page to make it easy to share your memories.

Send flowers to the Harris family.