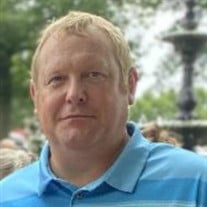 Jason Andrew Kociban, age 47, of Wheeling, passed away Saturday, February 5, 2022. He was born December 27, 1974 in Beeville, TX the son of Lora Kulpa Kociban of Wheeling and the late Andrew Kociban. Jason loved hunting, fishing camping and four-wheeling, anything outdoors he was involved. He loved being the life of the party and dearly loved being there for his daughter and enjoyed any sport she was involved in. In addition to his father, he was preceded in death by his maternal grandparents, Walter and Wanda Kulpa; paternal grandparents, Andy and Ann Kociban; three uncles, Mark McGee, Phil Kociban, and Dave Lorentz; one aunt, Kathy Lorentz and two cousins, David Lorentz and Ryan McGee. In addition to his mother he is survived by one daughter, Kelsey Kociban; her mother, Megan Pearl; one brother, Mike (Dawn) Kociban; aunts and uncles, Kathy McGee, Dave and Judy Kociban, and Chris and Sondra Kulpa; cousins, Amanda and Nathan Pletcher, Amanda and Chad Kociban, Christian and Bob Means, Melissa (Andrew) Teets, Chad (Lindsey) Kulpa; nephew and niece, Tevin and Bryanna Kociban. Family will receive friends on Thursday from 1pm-8pm at Grisell Funeral Home & Crematory, 1 Ridgecrest Road, Bethlehem/Wheeling. Private services and interment will be held at the convenience of the family.

The family of Jason Andrew Kociban created this Life Tributes page to make it easy to share your memories.

Send flowers to the Kociban family.