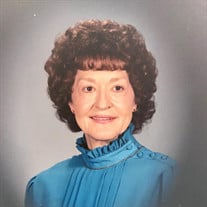 Jean Gauthier, 93, of Gahanna, OH formerly of Moundsville, WV passed away early Thursday morning, August 19, 2021, surrounded by loving family and friends. She was born to Addie and Sheridan Derrow at the Derrow farmhouse on Roberts Ridge, Moundsville, WV, on September 26, 1927. She was one of seven children. She graduated from Moundsville High School in 1945 and at the age of 17, went to Washington, D.C. to work for the FBI. It was in D.C. that she met her husband, Joe Gauthier, a handsome Navy man. They were married in 1948 and in 1950 they welcomed a daughter, Joni and in 1955 a son, Jerry. They traveled in the Navy and made homes in San Diego, CA; Washington, PA and Oak Harbor, WA. After thirty years of Naval service, Joe retired and they built a home on Roberts Ridge. They were married fifty-nine years when Joe passed away in 2006. Jean then moved to Gahanna to live near her son Jerry and family. In addition to her parents, she was preceded in death by her beloved husband, Joseph A. Gauthier; sisters, Virginia Jones, Erma Carmichael, Ruby Hubbs, and infant Mabel Lee Derrow; twin brothers, Robert and Ralph Derrow and Dale Derrow. Jean is survived by one daughter Joni Gauthier-Richmond of Moorpark, CA; one son Jerry (Cathy) Gauthier of Gahanna, OH; five grandchildren, David Richmond, Daniel Richmond, Jenna Gauthier, Nathan Gauthier and Andrew Gauthier; and a great-granddaughter, Lincoln Rose Richmond. Jean was a member of Ebenezer United Methodist Church. Private services will be held on Wednesday, August 25, 2021 at Greenview Cemetery, Roberts Ride, Moundsville.

Jean Gauthier, 93, of Gahanna, OH formerly of Moundsville, WV passed away early Thursday morning, August 19, 2021, surrounded by loving family and friends. She was born to Addie and Sheridan Derrow at the Derrow farmhouse on... View Obituary & Service Information

The family of Jean Gauthier created this Life Tributes page to make it easy to share your memories.

Send flowers to the Gauthier family.