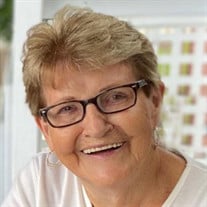 Jewel L. Campbell, age 97 of Glen Dale, WV died Monday, November 15, 2021 in Reynolds Memorial Hospital, Glen Dale. She was born June 14, 1924 in Cedarville, Gilmore County, WV the daughter of the late James A. and Ilene Stout Rhoades. She was a devout Christian; a loving wife, mother, grandma, aunt and friend. To say she was an extraordinary woman, would be an understatement. Jewel was raised during the Great Depression; after graduation, she traveled to California to become a “Rosie the Riveter” during WWII. Upon returning, she married and started a family. After moving to Moundsville, she became a nurse and worked at Reynolds Memorial Hospital until her retirement. She was an avid traveler and was always up for an adventure throughout her 97 years. She shined her brightest as a mother, grandma, and great-grandma; was athletic and competitive, which made her the top pick for family games. In later years, she loved going to Four Seasons Pool to walk and talk; always sporting a variety of lovely swimsuits. Jewel was lucky to find her soul mate and partner in every way, in her late husband, Bill. In addition to her husband and parents, she was preceded in death by a brother, Kenneth Rhoades; sisters, Madeline Lantz, and Margaret Lane; and her youngest child, Mary Jo Burke Hall. Survivors include her children, Larry (Linda) Burke of VA, June (Bill) Straub of Triadelphia, and Rick (Deb Fitzpatrick) Burke of Wheeling, WV; four step-daughters, Marsha (Kenny) Giffen of Bellaire, OH, Mavis (Paul) Nolte of Sutton, WV, Jonnette Muntz and Cindy (John) Peterson, all of Randolph, NY; eleven grandchildren, Charles (Kimberly) Burke, Chris (Jennifer) Burke, Shane (Jodi) Walters, Andy (Staci) Walters, Erin (Jose Lee) Saunders, Andy (Jennifer) Straub, Ricky (Beth) Burke, Tara Butler, Tracy (Chuck) Bell, Tara (Josh) Aycock, and Travis (Katie) Hall; six step-grandchildren, JT and Sara Paterson, Chelsea Nolte, Amanda Muntz, Justin (Lana) Giffin, and Jessica (Chris) Olivera; 26 great-grandchildren; and special nieces and nephews which she loved dearly. Jewel was truly a lover of life and will be missed by many. Family will receive friends on Thursday from 2-4 & 6-8 pm at Grisell Funeral Home & Crematory, 400 Jefferson Avenue, Moundsville and Friday from 10am until time of Funeral Service at 11am at First Christian Church, 1200 -3rd St., Moundsville with Rev. Wesley Howsare officiating. Interment in Riverview Cemetery, Moundsville. In lieu of flowers, Memorial contributions may be made to First Christian Church or Four Seasons Pool, c/o John White, 300 Mulberry Ave., Moundsville, WV 26041.

The family of Jewel L. Campbell created this Life Tributes page to make it easy to share your memories.

Send flowers to the Campbell family.