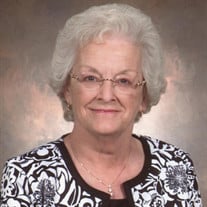 Joanne Burkett, age 82 of Moundsville, WV passed away June 4, 2022 at Cameron Nursing & Rehabilitation Center, Cameron, WV. She was born May 27, 1940 in Uniontown, PA the daughter of the late Robert and Catherine McAvoy Hunnell. Joanne was a retired teachers aide with the Marshall County Board of Education; she was a member of the first Girl Scout Troop in Moundsville; a member of the Moundsville Order of the Eastern Star #86; the former Moundsville Jaycee-ettes; and a faithful member of the Moundsville First Christian Church-Disciples of Christ. Joanne’s favorite past times included the many summers camping and boating at Seneca and Tappen Lakes; she was also proud to be her six grandchildren’s biggest fan at all their many sporting events. Survivors include her husband of 60 years, Neil Burkett; three children, Bob Burkett, Elizabeth (Mark) Walker and Neil (Wendy Clutter) Burkett all of Moundsville; of Moundsville; six grandchildren, Mitchell Burkett, Jacob (Marissa Meintel) Walker; Mark (Tara) Walker Jr., Courtney Walker, Logan and Cole Burkett and their mother, Melissa Burkett all of Moundsville; a brother, Robert (Becky) Hunnell, Jr. of Moundsville; a sister in law, Betty Simsa Burkett of Moundsville, several nieces and nephews and her beloved dog, Coco. Family will receive friends on Monday from 2-4pm and 6-8pm at Grisell Funeral Home & Crematory, 400 Jefferson Avenue, Moundsville. Family will receive friends on Tuesday from 12noon -1pm at the First Christian Church, 1200 Third Street, Moundsville, WV where funeral service will be held at 1pm with Rev. Wesley Howsare officiating. Interment will follow at Riverview Cemetery, Moundsville, WV. In lieu of flowers Memorial Contribution may be made to: First Christian Church, 1200 Third Street, Moundsville, WV 26041.

The family of Joanne Burkett created this Life Tributes page to make it easy to share your memories.

Send flowers to the Burkett family.