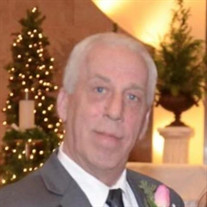 John “Jack” Burkle, age 67, of New Martinsville, WV, passed away Thursday, June 17, 2021 at Reynolds Memorial Hospital Glen Dale, WV. He was born September 16, 1953 in Wheeling, WV, a son of the late John A. and Thelma Cowan Burkle He was a retired salesman with 27 years of service at Jim Robinson Toyota Wheeling, WV and Methodist by faith. In addition to his parents, he was preceded in death by a brother, Ronald Burkle. Survivors include a daughter, Jennifer (Joey) Parsons of Huntersville, NC; a granddaughter, Alyson; sister, Cheryl (Roy) Thomas of New Martinsville; sister in law, Carolyn Burkle of Wheeling; and four nephews, Bill Burkle and Greg Burkle, both of Wheeling, Matt Thomas of Bahama, NC and Brad Thomas of New Martinsville. Friends will be received Thursday, July 1, 2021, from 10 am until the time of memorial service at 11:00 am at Grisell Funeral Home & Crematory 751 Third St. New Martinsville, WV.

The family of John "Jack" Burkle created this Life Tributes page to make it easy to share your memories.

Send flowers to the Burkle family.