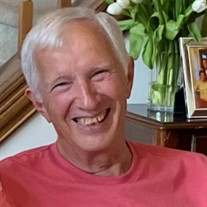 John Rykaczewski, age 75, of Bethlehem, WV, passed away peacefully in his sleep on Tuesday, October 12, 2021. He was born August 18, 1946 in Natrona, PA. Son of the late Edgar and Elinor (Cicholski) Rykaczewski, he is survived by his loving wife of 47 years Patricia (Logsdon) Rykaczewski, son Derek (Lexington) Rykaczewski of Pittsburgh, PA, daughter Trisha Rykaczewski of Wheeling, WV, sister Catherine (James) Garraux of Pittsburgh, PA, brother Karl (Maureen) Rykaczewski of Pittsburgh, PA; five grandchildren, Noah Holley, Aniah, Keira and Cruz Sparks, John “Jack” Logsdon Rykaczewski, and another grandbaby on the way; two sisters-in-law, Susie McCardle (Carl Wayne) of Fairfax, VA and Carol (Chris Nelson) Gongola of FL; one brother-in-law, James Perry Cochran of Glen Dale, WV; several nieces and nephews, including Matthew (Kylin) McCardle and great-nephew Graham McCardle, and numerous friends, including his best friend, Gary Snodgrass. In addition to his parents, he was preceded in death by his beloved brother, Stanley Rykaczewski. John was a graduate of West Liberty State College and West Virginia University where he earned his Master’s Degree in Education. He proudly worked for 37 years as a Guidance Counselor for the Marshall County Board of Education and later, for 13 years, at Lowes in Wheeling. Upon his retirement, John enjoyed sitting on the back porch in the mornings with his wife, a cup of coffee and a good book, which he said “started the day off on a good note.” An avid reader, John particularly enjoyed historical fiction and American history, and was a frequent visitor to the Ohio County Public Library. In addition to reading, John enjoyed listening to music, playing the guitar, testing his knowledge on Jeopardy, cheering Penn State Football, and his favorite pineapple upside down birthday cake. But his most treasured moments were spent with his family. John was extraordinarily proud of his wife and two children, and was an adoring “Pappy” to his grandchildren, whom he loved to watch play basketball, laugh, and share in the joy of their accomplishments. John was Catholic by faith. In lieu of flowers, the family suggests donations be made in John’s name to one of his favorite charities; St. Jude Children’s Hospital, an animal shelter, or a local library. Private services and interment will be held at the convenience of the family. Arrangements entrusted to Grisell Funeral Home & Crematory, 1 Ridgecrest Road, Wheeling/Bethlehem.

John Rykaczewski, age 75, of Bethlehem, WV, passed away peacefully in his sleep on Tuesday, October 12, 2021. He was born August 18, 1946 in Natrona, PA. Son of the late Edgar and Elinor (Cicholski) Rykaczewski, he is survived by... View Obituary & Service Information

The family of John Rykaczewski created this Life Tributes page to make it easy to share your memories.

Send flowers to the Rykaczewski family.