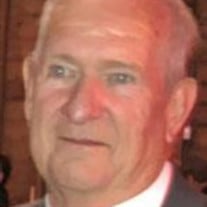 Jon Dale Wayt, age 72 of Moundville, WV died Wednesday, January 6, 2021 in Wheeling Hospital Medical Park, Wheeling, WV. He was born January 7, 1948 in Moundsville, the son of the late Harold E. and Goldie Mae Baker Wayt. He was a retired Master Sergeant from the US Army Reserves; having served two tours in Vietnam, and one tour in Desert Storm; he retired from Consol Coal after 33 years of service; was a member of the Moundsville Veteran’s Honor Guard, Moose Lodge, Marine Corp League, Earl Francis Post #3 American Legion, and UMWA; and was a lifetime member of the VFW and Moundsville Rifle and Pistol Club. Jon had a gifted sense of humor and did not know a stranger. In addition to his parents, he was preceded in death by two brothers, Richard “Dick” Wayt, and Harold “Butch” Wayt. Survivors include his wife of 51 years, Goldie A. Wayt; four children, Stephanie (Rick) Hickman of Wheeling, Joneta Wayt of FL, Christina (Bobby) Kidd of Moundsville, and Deanna Wayt of Wheeling; five grandchildren, Erika (Zane) Madden, Andrew (Risa) Bland, Brady (Tiherra) Hall, Nick (Corey) Hall, and Chase Armstrong; a great-grandchild, Berkeley Bland; and several nieces and nephews. The family would like to thank Wheeling Hospital’s nurses and doctor’s for their care, kindness, and compassion during this difficult time. Due to the on-going COVID Pandemic, there will be no visitation. Private services and interment will be held at the convenience of the family at Riverview Cemetery, Moundsville with the Moundsville Honor Guard providing graveside services. In lieu of flowers, the family asks that Memorial Donations be made to Moundsville Veterans Honor Guard.

The family of Jon Dale Wayt created this Life Tributes page to make it easy to share your memories.

Send flowers to the Wayt family.