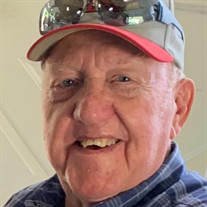 Joseph “Joe” Lawrence Wright, age 85 of Clarington, OH, passed away Sunday, July 25, 2021 at Wheeling Hospital, Wheeling, WV, surrounded by his loving family. He was born March 17, 1936 in Pricetown, WV, the son of the late Walter L. and Elizabeth Kendall Wright. Joe was a retiree of Ormet Corporation where he worked 42 years. He was a member of the Clarington United Methodist Church and the Clarington Masonic Lodge #597 F. & A.M. where he served as chaplain for 11 years. Joe was an avid hunter and fisherman which he enjoyed well into his 80’s. His greatest joy, however, was spending time with his children, grandchildren and great grandchildren and attending their many activities and sporting events. He was their #1 fan. In addition to his parents, he was preceded in death by his wife, June Williams Wright; a brother, John Wright; a sister, Helen Wright Cain and granddaughter’s husband, Donnie Jones Survivors include two sons; David (Kelly) Wright and Donald (Kelly) Wright; 4 grandchildren, Jordan Wright Jones, Collyn Wright (Nick) Rice, Tanner Wright and Colton Wright; 3 great grandchildren, Wyatt and Kendall Jones and Thea Rice. Family and friends will be received on Saturday July 31, 2021 from 3-8 p.m. at Grisell Funeral Home 125 Clarinda Dr. Clarington, OH with Masonic Services at 7:30. Private services will be held at the convenience of the family in Clarington Cemetery, Clarington, OH. Memorial contributions may be made to Clarington United Methodist Church 106 Church Street Clarington, OH 43915.

The family of Joseph "Joe" Lawrence Wright created this Life Tributes page to make it easy to share your memories.

Send flowers to the Wright family.