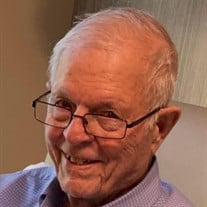 Kenneth DeLee Williams, 92, loving father and grandfather, of Virginia Beach, VA, died Sunday November 21, 2021. He was born October 17, 1929 in Denver, CO; the son of the late George Zur and Hulda Michel Williams. He graduated from University of Richmond with a Bachelor of Science in Physics; held a Masters in Physics from the University of Virginia and Johns Hopkins University. Ken was a radiological physicist of nuclear medicine, where he spent most of his career at National Institutes of Health and Washington Hospital Center; and he served in the United States Navy on the USS Shenandoah. He was an avid ham radio operator; master of technology, tinkering with all electronics; loved tennis and paddle tennis, playing through his mid-eighties; coached and served as commissioner for his children’s sports teams. Ken was an experienced sailor; dedicated Washington Redskins fan; die-hard Republican; was very patriotic to his country; and his greatest love was his children and grandchildren. Integrity and honesty were his most important character traits; a man of few words, the ones spoken being profound. In addition to his parents, he was preceded in death by his beloved wife, Katherine Addison Williams; and one sister, Jeannine Monson. Survivors include six children, Emily (Bill) Silverman of Arlington, VA, Lee Williams of Charleston, SC, Kitty (Chris) Janney of Washington, DC, Betsy (Jim) Gregory of Punta Gorda, FL, George (Anne) Williams of Richmond, VA, Allie (Grace) Williams of Bethesda, MD; 17 grandchildren, who knew him as “Pia”, Alex (Genevieve), Annie (Asher) and Sammy Silverman; John-Hunter (Mady), Katherine, and Grafton Williams; Addison, Dunham, and Townsend Janney; Joey and Teddy Gregory; Conner, Addie, and Brice Williams; Chase, Josh, and Ellie Williams; three great-grandchildren.    Graveside memorial service will be held Saturday, December 4, 2021 at 11am at Hollywood Cemetery, Richmond, VA. In honor of Ken’s special granddaughter, Addie, memorial donations may be made to jacobschance.org.

The family of Kenneth DeLee Williams created this Life Tributes page to make it easy to share your memories.

Send flowers to the Williams family.