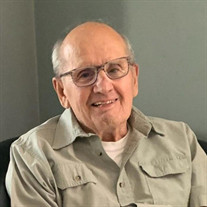 Larry Pozell, age 91 of Washington Lands, Moundsville, WV died Wednesday, September 29, 2021 in Reynolds Memorial Hospital, Glen Dale, WV. He was born February 3, 1930 in Cresap, WV the son of the late Larry and Regina Baccaro Pozell. He was a retired coal miner with North American Mine #1, and did home construction. He was a member of Jehovah’s Witnesses in Moundsville who loved the Bible and Bible study. Larry enjoyed the public ministry and spent 8 years as a pioneer and was involved in 125 Kingdom Hall & Assembly Hall projects with his brother, Charlie Pozell, in the US and Puerto Rico. Larry’s favorite pastimes included fishing in Canada, and gardening. He was happy to share garden produce, especially his tomatoes. He often said, with a smile, “the sun always shines in Washington Lands”. He was preceded in death by 7 brothers and sisters, and an infant daughter, Barbara Helen Pozell. Survivors include his wife of 71 years, Nellie Grimm Pozell; three daughters, Christy (Bob) Dickerson of Moundsville, Debra Fitzpatrick of Wheeling, and Joyce (David) Smith of Washington, PA; a brother, Charles Pozell of Moundsville; a sister, Angie (George) Stankas of Enon, OH; Pap is survived by 8 grandchildren; and 6 great-grandchildren; a sister-in-law, Ella Pozell of Ashboro, NC; a brother-in-law, Jim Grimm of Moundsville; and several nieces and nephews. The family extends special thanks for the care Larry received at Stonerise Care Center, and comfort care at Reynolds Memorial Hospital; and for compassion shown by Dr. Kureishy and his PA Brenda Dennis. Private interment will be held by the family in Riverview Cemetery, Moundsville. A Memorial Service will be held at a later date. Arrangements entrusted to Grisell Funeral Home & Crematory, Moundsville.

The family of Larry Pozell created this Life Tributes page to make it easy to share your memories.

Send flowers to the Pozell family.