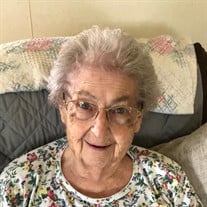 Lena E. Fankhauser, age 93, of Powhatan Point, OH, passed away Tuesday, July 20, 2021, at her home. She was born April 3, 1928 in Powhatan Point, OH, a daughter of the late William Henry and Mary Alice Robb Arman. She was a homemaker,... View Obituary & Service Information

The family of Lena E. Fankhauser created this Life Tributes page to make it easy to share your memories.

Send flowers to the Fankhauser family.