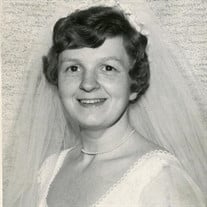 Linda Marie Cochran, age 74 of Moundsville, WV died Tuesday, May 31, 2022 in WVU Wheeling Hospital Medical Park, after a short battle with cancer. She was born July 29, 1947 in Pekin, IL, the daughter of the late Harold and Mildred Johns. She was a 1965 graduate of Peoria High School, which she followed with employment as a medical records supervisor before transferring to Moundsville in 1973 to continue this line of work. Linda married James Cochran, a long-time Moundsville newspaper reporter and columnist, on May 24, 1975. She was a member of the First Presbyterian Church, where she served as an Elder, a Deacon, and cooked many of the meals held at the church. A lifelong Cubs fan, she and her husband attended games in all Major League ballparks (33) with Uniglobe Travel over a period of 17 years. Although she was not an official member of the Moundsville Lions Club, she was involved in many of the club’s events and was awarded the Leonard Jarrett award. She loved animals and was always interested in a good story featuring them, whether it was the antics of squirrels, chipmunks, birds, or a former beloved pet. In addition to her parents, she was preceded in death by her brother, David Johns; a sister-in-law, Melba (Howard) Huddlestun; and a nephew John Huddlestun. Survivors include her husband Jim; their daughter, Melinda (Ken) Barrett of Arlington, VA; a granddaughter, Lillian Barrett; step-grandchildren, Kaitlin Barrett of Goose Creek, SC and Jonathan Barrett of Birmingham, AL; a brother-in-law, E. Howard Cochran of Okeechobee, FL; nephews, Tim Johns and Tom (Jaimie) Johns of Alpha, IL and Gary Huddlestun of Kissimmee, FL nieces, Jane Cooper and Sue (Ken) Thomas of Reynoldsburg, OH; and her dog, Eevee survives and is missing her friend. Family will receive friends on Friday from 2-4 and 6-8 pm at Grisell Funeral Home & Crematory, 400 Jefferson Ave., Moundsville where visitors are encouraged to use the Baker Avenue entrance. Funeral Services will be held Saturday at 1 pm at the Funeral Home with Rev. Alan Jeffries officiating. Interment in Northview Cemetery, New Martinsville, WV. Memorial donations may be made to the Marshall County Animal Rescue League, PO Box 13, Glen Dale, WV 26038.

Linda Marie Cochran, age 74 of Moundsville, WV died Tuesday, May 31, 2022 in WVU Wheeling Hospital Medical Park, after a short battle with cancer. She was born July 29, 1947 in Pekin, IL, the daughter of the late Harold and Mildred Johns.... View Obituary & Service Information

The family of Linda Marie Cochran created this Life Tributes page to make it easy to share your memories.

Send flowers to the Cochran family.