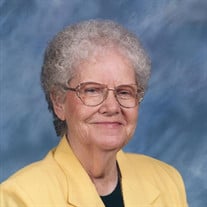 Louiza B. Dulaney, 96, formerly of Moundsville, died Friday, March 5, 2021 at her son&#8217;s home in Carrollton, Ohio. She was born March 22, 1924 in Marshall County, WV. She was a retired cook for Marshall County Schools; former... View Obituary & Service Information

The family of Louiza B. Dulaney created this Life Tributes page to make it easy to share your memories.

Send flowers to the Dulaney family.