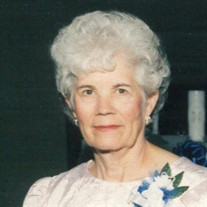 Lucy McCardle, age 92 of Glen Easton, WV died Monday, August 3, 2020 at home. She was born August 20, 1927 in Wetzel County, WV the daughter of the late Yeater and Levada Anderson O&#8217;Neil. She was retired from the former Marx... View Obituary & Service Information

The family of Lucy McCardle created this Life Tributes page to make it easy to share your memories.

Send flowers to the McCardle family.