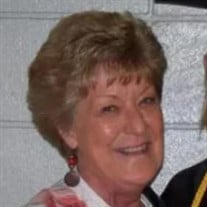 Margaret B. Howell, age 79 of New Martinsville, WV, passed away Tuesday, August 3, 2021 at her home. She was born April 16, 1942 in Wellsburg, WV, daughter of the late Charles Franklin and Maude Adams Vandruff. Margaret worked for... View Obituary & Service Information

The family of Margaret B. Howell created this Life Tributes page to make it easy to share your memories.

Margaret B. Howell, age 79 of New Martinsville, WV, passed away...

Send flowers to the Howell family.