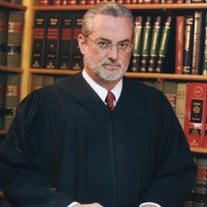 Judge Mark A. Karl, age 75 of Moundsville, WV died Saturday, May 28, 2022 in Reynolds Memorial Hospital, Glen Dale, WV. He was born July 5, 1946 is Sistersville, WV the son of the late Kenneth Thomas and Mabel Hamilton Karl. Mark graduated from Sistersville High School in 1964, where he was the class Valedictorian and was a member of the State Championship golf team. While attending Sistersville High School, Mark caddied on two separate occasions for professional Golf Hall of Famer, Sam Snead, during West Virginia PGA tournaments held at the Sistersville County Club. Mark served his country as a Captain in the United States Army. He attended WVU on a Golf Scholarship until his Graduation in 1968, where he was a member of the Sigma Nu Fraternity. Following College graduation, he then attended WVU College of Law, where he graduated in 1971. In 1971 he was admitted to practice law in both Federal and State Courts. In 1972, at the age of 26, he was elected as Marshall County Prosecuting Attorney, having been the youngest elected prosecuting attorney in the United States; he served as Marshall County Mental Hygiene Commission; Administrative Law Judge for Unemployment Compensation Commission; and as Chief Public Defender for 2nd Judicial Circuit of WV. In November of 1992 Judge Mark was elected Circuit Judge for the 2nd Judicial Circuit for the State of WV; taking office on January 1, 1993; was re-elected in 2000, and again in 2008. He retired from the Bench in 2015. He was a 40 year long-time member of the Moundsville Country Club; and a 40 year season ticket holder of WVU Football. Survivors include his beloved wife of 30 years, Shirelle Knight Karl; a brother, Nicholas Hamilton Karl of Sistersville; two brothers-in-law, Craig (Kathleen) Knight of Valley Grove, WV and Chuck (Phyllis) Knight of Rochester, MN; and nieces and nephews, Alexandria and Kim Knight, and Zachary, Drew and Christian Knight. Private services and interment will be held at the convenience of the family. Arrangements entrusted to Grisell Funeral Home & Crematory, Moundsville.

The family of Judge Mark A. Karl created this Life Tributes page to make it easy to share your memories.

Send flowers to the Karl family.