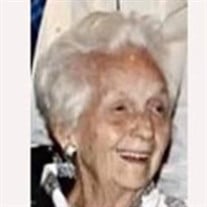 Mary Lou Holler Jones 3/1/1930 – 1/28/2021 Born in her parents’ home on Jacquette Street in Bridgeport, Ohio on March 1, 1930, Mary Lou was the youngest and eighth child of the late George, Sr. and Florence (Mauck) Holler, both local entrepreneurs in that area. She was a devout Catholic who received all of her sacraments but the last at St. Anthony of Padua Catholic Church in Bridgeport. She attended primary school there and graduated from all-girls high school Saint Joseph’s Academy which merged with Wheeling Central Catholic. On June 10th 1950, she married Robert L. (Bob) Jones who was finishing his chemistry degree at Bowling Green State College. Babies soon followed, all have survived her: in ’51, Robert L (April Stolfer), ’53, Thomas E. (Vyvian Cook), ’55, W. Keith (Kim Huffman), ’56 Donald L (Jan Thornton), ’59 Richard T. (Sue Edel), and ’63 Judianne Jones Lange (Lawrence – deceased). In the midst of these child rearing years, Bob and Mary Lou lived in Sewickley, PA and in Bridgeport before moving to New Martinsville in 1961. After the youngest started school, Mary Lou began her career as a receptionist, office manager, and occasional orthodontic assistant, first for dentists Norman Martin and later for Jerry Whalen, and finally for orthodontist Ed Watson. She was a member of the Dogwood Twig (a service and fundraising group for the Wetzel County Hospital) and she was one of the earliest members of the Board of Directors of what is now the Bayer Heritage Federal Credit Union. She was elected to the Wetzel County Republican Executive Committee several times. Mary Lou loved her time as a Red Hatter, playing and hosting bridge clubs, and supporting Bob’s and the kids numerous activities and passions. She loved yellow and white daisies, talking about her family, donating blood every chance she got, and kept every card or note that every one of her kids sent to her. She loved large family gatherings and the children were “encouraged”… strongly, to gather for Thanksgiving. Peanut butter balls, newspaper clippings, anything that any of the grandkids were selling or doing, dear friends from the Mobay days, chicken and noodles all were her joys. Having raised a bunch of boys, she delighted most in visits from her daughter and four granddaughters. While Mary Lou’s children have all survived her, she will be lovingly remembered as “Grammy” by 14 grandchildren and 9 great grandchildren scattered from California to Florida and to England. She loved WVU, and while never earning a degree from there, her children, their spouses and grandchildren have accumulated 20 degrees as Mountaineers. In addition to her parents Mary Lou witnessed the passing of her husband, Bob, and all of her siblings: Anthony, Genevieve (Gretzinger), George, Jr. (Spud), Theresa (Schneid), Gerald, James, and toddler, John – all of the Belmont County Ohio area as well as beloved son-in-law Lawrence Lange. Per her wishes, her ashes will be buried along with Larry Lange’s next to Bob in Northview Cemetery in New Martinsville in a private ceremony. Additionally, she has requested a Celebration of Life to be held in her memory in the spring. She asked that in lieu of flowers that memorial donations be sent to St. Vincent de Paul Catholic Church, 21 Rosary Road, New Martinsville, WV 26155 Arrangements entrusted to Grisell Funeral Home and Crematory New Martinsville.

The family of Mary Lou Jones created this Life Tributes page to make it easy to share your memories.

Send flowers to the Jones family.