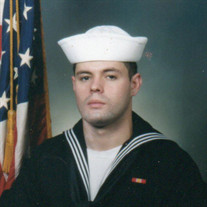 Michael Edward Grennell, age 36, of San Diego, CA, formerly of Paden City, WV passed away Thursday, June 17, 2021 at his home in California. Michael was a Seabee in the U.S. Navy, having served in Iraq and Afghanistan. He was... View Obituary & Service Information

The family of Michael Edward Grennell created this Life Tributes page to make it easy to share your memories.

Send flowers to the Grennell family.