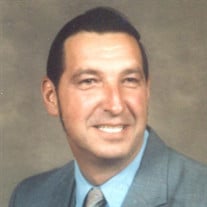 Milton E. McCracken, age 80 of Cameron, WV and New Eagle, PA died Wednesday, August 11, 2021 at his home in New Eagle, PA. He was born December 1, 1940 in Aleppo, PA, the son of the late Joseph E. and Theo Wellman McCracken. He was... View Obituary & Service Information

The family of Milton E. McCracken created this Life Tributes page to make it easy to share your memories.

Send flowers to the McCracken family.