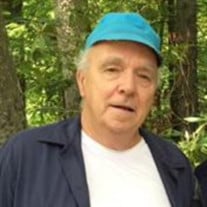 Philip “Flip” E. Patrello, Sr. age 77, of Glen Dale, WV passed away Monday, September 20, 2021, at WVU/RM Hospital in Glen Dale, WV. He was born January 26, 1944 in Glen Dale, WV the son of the late Joseph A. and Mary C. Sawinski Patrello. He graduated from Wheeling Central Catholic High School in 1962, retired from the Plumbers and Steamfitters Local Union # 83 and was a member of St. Jude Catholic Church and attended St. Francis Xavier Catholic Church. Flip was a true family man, he helped anyone he could, always giving not asking anything in return; he was patient and loved his whole family and his friends. He enjoyed wood working, reading, and being outdoors. In addition to his parents, he was preceded in death by a sister-in-law, Judy Patrello. Survivors include his loving wife of 55 years, Kathleen Ullom Patrello; a daughter, Mary Jo Patrello of Glen Dale; a son, Philip E. Patrello, Jr. at home; a grandson, Jayce (Natasha) Patrello of Moundsville; three great grandchildren, whom he dearly loved, Wyett, Noah, and Parker; two brothers, Joseph B. Patrello of Cameron and E. Michael Patrello of Moundsville; a sister, Catherine (Roger) Frame of Moundsville; and several nieces, nephews, and friends. Family will receive friends on Thursday from 2-4 & 6-8pm at Grisell Funeral Home & Crematory, 400 Jefferson Avenue, Moundsville where Rosary Devotions will be recited at 7pm. Funeral Liturgy with Mass will be celebrated Friday at 11am at St. Francis Xavier Catholic Church, 912 7th Street, Moundsville with Fr. That Son Ngoc Nguyen as celebrant. Interment will take place in Riverview Cemetery, Moundsville at the convenience of the family.

The family of Philip "Flip" E. Patrello Sr. created this Life Tributes page to make it easy to share your memories.

Send flowers to the Patrello family.