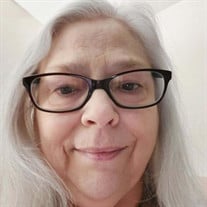 Rebekah N. Powell, age 67 of New Martinsville, WV, passed away Thursday, July 22, 2021 at her home. Becky was known for her joyful, Christ centered faith and faithfulness and is now in the presence of her Lord and Savior. She was member of Trinity Presbyterian Church (PCA) in New Martinsville. Becky was born on April 29, 1954 in New Martinsville to Joseph Edwin (Ed) Milam and Mary Myfawnwy Pease Milam, both deceased. She was also preceded in death by a son, Sean Hamilton Powell in 1997. She was a loving wife, a wonderful mother, a homemaker and a Master Gardener. Becky attended Potomac State College and later graduated from West Virginia Northern Community College. She had a passion for always learning and particularly enjoyed teaching children, whether at church, at home or at the Parks and Recreation Summer Day Camps. She was an avid reader, not only the Bible, but also the sciences, classical literature, folk arts, gardening, history, and so much more. One of ther great accomplishments was reading the entire “500 Books of All Time That Everyone Should Read”. Her favorite book of the Bible was Job. It provided great comfort at the loss of her son; and she very much enjoyed Psalm 139 (“I will give thanks to thee; for I am fearfully and wonderfully mad; Wonderful are thy works: that my soul knows right well”) Becky was an amateur naturalist, enjoying the flora and fauna around her home. She particularly enjoyed birdwatching, and the squirrels who kept stealing the bird food. Her favorite animal was probably the honeybee. She was very knowledgeable in herbs, folk arts and enjoyed having long discussions with her daughter, Erin on Medieval English History or any other subject, as well. She was an avid spinner and weaver and demonstrated often at fairs and festival around West Virginia with her mother. Her other loves were camping, watching BBC Britcoms, the Lord of the Rings books and movies, classical music, and being with her family. One of her favorite authors was PG Wodehouse, which probably accounts for her keen and sharp wit. Her knowledge of the English language was so vast that she could hold her own against any literary individual. She was known to teach college professors and theologians new words and how to correctly use them. It was very difficult for anyone to get a word up on her, but she always enjoyed the challenge. Becky was an absolute delight to all who met or knew her. Becky is survived by her high school sweetheart and husband of 48 years, Michael; her wonderful daughter, Erin Tobi Powell; a sister, Susan Milam, and niece Grace Milam, both of Frederick, MD; a brother, David Milam, and his wife Sallie who live in Charleston, WV. She is also survived by her much loved and adored granddogs, Glacey and Sylvie. A memorial service celebrating her life will be held in September. Contributions in Becky’s name may be made to the Oglebay Good Zoo, 465 Lodge Drive, Wheeling, WV 26003; specifically to the Sean Powell Docent program. Arrangements entrusted to Grisell Funeral Home & Crematory New Martinsville.

Rebekah N. Powell, age 67 of New Martinsville, WV, passed away Thursday, July 22, 2021 at her home. Becky was known for her joyful, Christ centered faith and faithfulness and is now in the presence of her Lord and Savior. She was member... View Obituary & Service Information

The family of Rebekah Nell Powell created this Life Tributes page to make it easy to share your memories.

Send flowers to the Powell family.