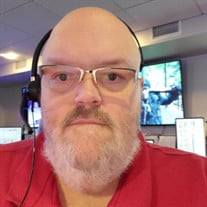 Richard A. Farley, age 60 of Moundsville, WV died Monday, June 13, 2022 in WVU Wheeling Hospital, Wheeling, WV. He was born December 31, 1961 in Glen Dale, WV the son of the late Carl R. and Mary Lou Miller Farley. He was a Marshall County 911 Dispatcher since 2000; a Moundville Volunteer Firefighter for over 30 years; a former EMT with Tri-State for 22 years; and a member of First Christian Church of Moundsville. In addition to his parents, he was preceded in death by a sister, Carla Lou Farley. Survivors include three children, Carl (Jamie) Farley of Moundville; Maria Farley of Moundsville; and Chris (Kathrine) Brannan of Washington, PA; a brother, Mark (Maryanne) Farley of VA; six grandchildren, Caroline and Lauren Brannan, Austin (Lupe) Schwing, Ashley Schwing, Megan Schwing, and Kenzie Farley; two great-granddaughters, Rose and Avery Schwing; and his former spouse, Andrea Jo Farley of Moundsville. Family will receive friends on Wednesday from 12noon -2pm and 5pm until time of Fireman’s Service at 7:30pm at Grisell Funeral Home & Crematory, 400 Jefferson Ave., Moundsville where funeral services will be held Thursday at 10am with Chuck Morrow officiating. Private Interment will be held at the convenience of the family. Memorial contributions may be made to Moundsville Volunteer Fire Department, 1228 First St., Moundsville, WV 26041.

The family of Richard A. Farley created this Life Tributes page to make it easy to share your memories.

Send flowers to the Farley family.