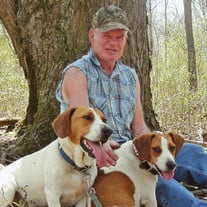 Robert D. “Bob” Miller, 81, of Moundsville, WV died Sunday, March 22, 2020 in Liza’s Place. He was born March 1, 1939 in Silver Hill, WV; the son of the late Estel and Genevieve Henderson Miller. Bob was employed by Conoco/Venco for 30 years; and was a faithful member of the Hillview Terrace church of Christ in Moundsville, WV. He was the hardest worker you’d ever meet; an avid gardener; could feed an army at the drop of a dime; and enjoyed hunting with his dogs, Sam and Jake, and spending time at Camp Hoopey in Silver Hill, WV. He and his wife were happily married for almost 61 years, and they have been the perfect example of love. He loved his family deeply, and those dearest to him called him “Pappy”. In addition to his wife, Naomi McFadden Miller; survivors include one daughter, Cathy (Terry) McCracken; one son, Rob (Sherry) Miller; three grandchildren, Kelly Pettit of Cameron, WV, Megan (Robby) Root of Bridgeport, WV, Isaac Miller of Cameron, WV; five great-grandchildren, Jasmine Jasenec of Cameron, WV, Carson Currey of Bridgeport, WV, Millie Cate Currey of Bridgeport, WV, Bailey Root of Bridgeport, WV, and Evan Root of Bridgeport, WV; one brother, Joe Miller of New Martinsville, WV; one sister, Garnet Miller Phillips of St. Albans, WV; and several nieces and nephews. A celebration of Bob’s life will be officiated by Andy Robison at a graveside service on Tuesday at 1pm at Jolliffe Cemetery in Silver Hill, WV. In lieu of flowers, memorial contributions can be made to the WV School of Preaching. Arrangements entrusted to Grisell Funeral Home & Crematory, Moundsville.

The family of Robert D. "Bob" Miller created this Life Tributes page to make it easy to share your memories.

Send flowers to the Miller family.