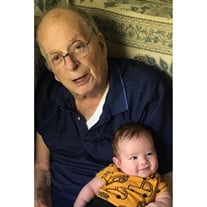 Robert D. Phillips, 92, of New Martinsville, WV, passed away peacefully at home early Saturday morning, March 21, 2020 with family by his side. Bob was born May 21, 1927 to the late Burney and Sophie Probst Phillips. He graduated from Magnolia High School in 1945 and enlisted in the Navy. He was introduced by a mutual friend to Jean Meeks. They married on April 20, 1951, and a lifetime of love began. In addition to his beloved wife of 68 years. He is survived by 3 children, 7 grandchildren and a precious 9 month old great grandson.He will be dearly missed by his son, David & his wife, Tonya and their children, Ethan, Ashley, Kelsey, Robbie, and Robbie’s son, Cranston, whom he adored; his daughter, Denise & her husband, Rusty Joins, and their 2 daughters, Kylie and Shannon; and his daughter, Anita & her husband, Jack Puglia, her son, Howard Lee and special family friend, Dave Hohn. He is also survived by his sister, Mary Jane Northcraft and sister-in-law, Joan Meeks Posego, and her husband, John, as well as several nieces and nephews and cousins. He was employed at PPG Industries for 35 years. After retiring in 1986, Bob enjoyed feeding and watching birds, repairing clocks and listening to Bluegrass music. He was a member of New Martinsville United Methodist Church, formerly St John’s UMC, where he served as an usher for as long as he was able. The family would like to thank all the Journey Hospice workers who cared for Bob last year, as well as Wetzel County Home Care, who most recently cared for him. Private family visitation on Tuesday, followed by a graveside service and interment at 2 pm at Northview Cemetery, New Martinsville with Rev. Stephen Rector officiating. Unfortunately , due to the COVID-19 pandemic, visitation prior the service is limited to family only. In lieu of flowers, memorial contributions may be made to Journey Hospice 314 Wells St. Sistersville WV 26175 or NMUMC 10 Howard Jeffers Dr. New Martinsville, WV 26155, in memory of Bob. Arrangements entrusted to Grisell Funeral Home & Crematory, 751 Third St., New Martinsville,WV. We encourage you to please offer your sympathy expressions to the family at grisellfuneralhomes.com

Robert D. Phillips, 92, of New Martinsville, WV, passed away peacefully at home early Saturday morning, March 21, 2020 with family by his side. Bob was born May 21, 1927 to the late Burney and Sophie Probst Phillips. He graduated from... View Obituary & Service Information

The family of Robert D. "Bob" Phillips created this Life Tributes page to make it easy to share your memories.

Send flowers to the Phillips family.