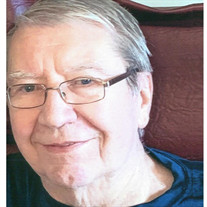 Ronald G. Trowbridge, Sr., age 80 of Cameron, WV passed away Friday, November 20, 2020 as a resident of the Cameron Continuous Nursing and Rehabilitation Center in Cameron.. He was born April 16, 1940 in Cameron, WV the son of the late Pershing F. and Virginia L. Walker Trowbridge. Ron graduated Cameron High School in 1958 and enlisted in the US Navy in 1958, serving from 1958-1964. He completed his Bachelor of Arts degree at West Liberty State College in Special Education and Social Studies in 1971, and his Masters of Educational Administration from West Virginia University in 1973. As an educator, Ron began his career at Magnolia High School and then moved onto Cameron High School as a teacher. He then became principal of Cameron High School, serving for 17 years. After Cameron High School, he accepted the position of Assistant Principal/Athletic Director for John Marshall High School. He finished his career in Marshall County Schools as the General Supervisor of Maintenance and Service Personal at the Board of Education. After his retirement, Ron continued to serve as a substitute teacher and principal for Marshall County Schools for an additional 16 years. Throughout his life, he dedicated his professional career to education for more than 47 years. Ron was member of the First Christian Church of Cameron; a member of the Cameron Masonic Lodge #17 A.F & A.M.; the Scottish Rite, Wheeling; Osiris Shrine, Wheeling; and the American Legion Post # 18, Cameron. He was a lifelong fan of the Pittsburgh Steelers and WVU Mountaineers. He enjoyed high school sports and served as a 2-term President of the OVAC and 15 years on the OVAC Executive Board. Surviving is Patricia Trowbridge; three sons, Ronald (Amy) Trowbridge of Cameron, Daniel (Jami) Trowbridge of Mannington, OH , and Dustin (John) Trowbridge of Danbury, CT; six grandchildren, Derek, Cassidy, and Natalie Trowbridge, Taylor (Levi) Garrison, Luke and Carly Trowbridge; three brothers, two sisters, and several nieces and nephews. Deep gratitude is offered to the staff and caregivers of the Cameron Nursing and Rehabilitation Center for their exemplary care and compassion for Ron through his final years. His quality of life was greatly enriched by their patience, attentiveness, companionship, and endless refills of his coffee mug. Family will receive friends on Wednesday from 11am until the time of the funeral service at 1pm at Grisell Funeral Home & Crematory, 400 Jefferson Avenue, Moundsville, WV with Pastor Dave McCombs officiating. Interment in Highland Cemetery, Cameron, WV. Memorial Contributions may be made to: Shriner’s Hospital, 1645 W. 8th Street, Erie, PA 16505

Ronald G. Trowbridge, Sr., age 80 of Cameron, WV passed away Friday, November 20, 2020 as a resident of the Cameron Continuous Nursing and Rehabilitation Center in Cameron.. He was born April 16, 1940 in Cameron, WV the son of the late... View Obituary & Service Information

The family of Ronald G. Trowbridge created this Life Tributes page to make it easy to share your memories.

Send flowers to the Trowbridge family.