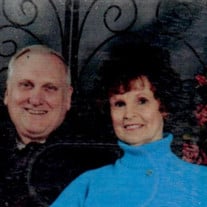 Betty Lee Cook age 85, Russell Jerry “The Bear” Cook, age 86, both of New Martinsville. Betty passed May 18, 2021 and Jerry passed away May 31, 2021 in New Martinsville, WV. Betty was born, February 15, 1936 in New Martinsville, daughter of the late Eseck C. & Opal Hutchison Burlingame. Betty was a retired employee of Witschey’s Market, in New Martinsville. Jerry “The Bear” was born, May 13, 1935 in Proctor, WV, a son of the late Russell Cook and Fay Baxter Evans. Jerry worked 18 years at Ormet and was owner and operator of Cook Auto Parts for 20 years. Jerry was an avid Ham radio operator for several years. They were Methodist by faith. The couple had been married for 66 years, they were preceded in death by their parents and a grandson; Winston Cook. Jerry was preceded by a sister, Eloise Davis. Survivors include two sons, one daughter, eight grandchildren and two great grandsons. Private services will be held at the convenience of the family with interment in Northview Cemetery. Memorial contributions may be made to New Martinsville City Library, 160 Washington Street, New Martinsville, WV 26155 or Wetzel County Animal Shelter, 7257 Burch Ridge Rd, Proctor, WV 26055. Arrangements entrusted to Grisell Funeral Home & Crematory, 751 Third Street, and New Martinsville WV.

The family of Russell Jerry "The Bear" Cook created this Life Tributes page to make it easy to share your memories.

Send flowers to the Cook family.