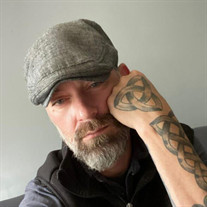 Samuel Brian McIlvain, age 46 of Columbus, OH, formerly of Moundsville, WV entered Heaven to be with Jesus on Saturday, October 30, 2021 in Grant Medical Center, Columbus, surrounded by his father and mother, and his girl friend, Lexy Webb at his bedside; and Spencer, Matt and Beth on video. He was born January 21, 1975 in Glen Dale, WV the son of Donald, Sr. and Carol Henry McIlvain. Sam was a 1993 Graduate of John Marshall High School; attended One Church of Columbus, or listened on-line to Greg Ford most every Sunday; and despite not owning a motorcycle, Sam was welcomed by a motorcycle club in Gahanna, where he was witnessed to by Chaplin J. Michael Jennings. He was preceded in death by his grandparents, Orville Henry, Sr., Lucille Rice, and George and Laura McIlvain; several aunts and uncles; and his best friend, Jay Wiggins. In addition to his parents, survivors include his two daughters, who he dearly loved and was so proud of, Wynn Caroline McIlvain and Auden Elisabeth McIlvain, both of Powell, OH; three brothers, Donald (Tina) McIlvain of Cut Bank, MT, Spencer G. (Leah) McIlvain, and Matthew M. (Beth) McIlvain, all of Moundsville; his girlfriend, Lexy Webb of Gahanna, OH; several nieces and nephews including his niece, Brianna McIlvain Stevey, who he had a special bond with; several aunts and uncles; many cousins, including, Becky Nowak, Ricky Haythorn, Loretta Haythorn, and many friends from childhood, Scott O’Dell, Jimmy George, Mike and Terry Blackwell, and Matt and Aaron Wood; and two best friends he met when moving to Columbus, Jake Carner and Marten Gallagher. Family will receive friends on Friday from 4-8pm at Grisell Funeral Home & Crematory, 400 Jefferson Ave., Moundsville where Funeral Services will be held Saturday at 1pm with J. Michael Jennings and Pastor Tony Romano officiating. Private interment will be held at the convenience of the family. Memorial contributions may be made to Grisell Funeral Home & Crematory, 400 Jefferson Ave., Moundsville, WV 26041.

The family of Samuel Brian McIlvain created this Life Tributes page to make it easy to share your memories.

Send flowers to the McIlvain family.