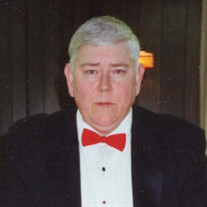 Sherwood Dobbs age 71, of Moundsville, WV passed away Saturday, November 7, 2020. He was born January 22, 1949 in Marshall County, WV the son of the late, Willis and Genevieve “Jane” Woods Dobbs. Sherwood was a member of Calvary United Methodist in Moundsville, where he served as an usher, a trustee, and a member of the Methodist Men, he also enjoyed working the fish fry’s. He also was a member of the B.P.O. of the Elks where he served many positions including Past Exalted Ruler. He worked at Triangle Conduit as an electrician for many years and also coached softball for Curly’s Softball teams, men’s and women’s for many years. In addition to his parents, he was preceded in death by his brother and sister in law, Ralph Wright, Sr. and Jessie Wright,; a sister, Patty Yoho; and three nephews, Ralph Wright, Jr., Brent Yoho, and Dr. Billy Cumpston. Survivors include his wife of 37 years, Vicki Cumpston Dobbs; a niece, Tammy (Jake) Davis; two nephews, Rick Wright and Keith “Panger” (Kay) Wright; brother and sister in laws, Keith (Sandy) Cumpston, Karen (Homer) Mickey, John D. (Debbie) Cumpston, Jeff (Tammy) Cumpston, Mike Cumpston, James W. (Debbie) Cumpston, and Woodrow Yoho; several nieces, nephews and cousins. Family will receive friends on Tuesday from 2-4pm and 6-8 pm at Grisell Funeral Home & Crematory, 400 Jefferson Ave., Moundsville where funeral services will be held Wednesday at 11am with Pastor Annette Carper officiating. Interment in Riverview Cemetery, Moundsville, WV. The family request mask to be worn and to practice social distancing- if you feel uncomfortable coming to visitation it is understood and the family will be having a memorial service with luncheon at a later date. In lieu of flowers memorial contributions may be made in Sherwood’s name to: Calvary United Methodist Church, 1601 First Street, Moundsville, WV 26041.

The family of Sherwood Dobbs created this Life Tributes page to make it easy to share your memories.

Send flowers to the Dobbs family.