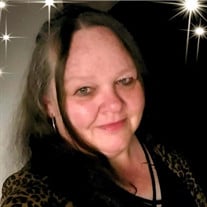 Tammy Mae Hadley, age 55, of New Martinsville, WV, passed away Saturday, September 11, 2021, at her home. She was born August 3, 1966 in New Martinsville, WV the daughter of the late Darrell and Margie Dennis Cross. She was... View Obituary & Service Information

The family of Tammy Mae Hadley created this Life Tributes page to make it easy to share your memories.

Send flowers to the Hadley family.