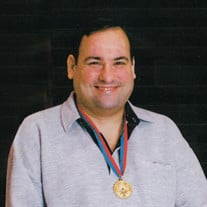 Tannar D. Chamberlain age 46, passed away on Thursday, March 26, 2020 at his home in Wheeling, WV. Tannar was a graduate of John Marshall High School where he took great pride in managing the baseball team that lovingly named him “Chuck” after Pirates manager, Chuck Tanner. Tannar spoke fondly of the team camaraderie for years to come and later found similar joy among his fellow athletes in Special Olympics, competing and medaling in many events. Perhaps his greatest achievement, however, was his ability to discover joy in the everyday—walkman-in-hand walks along Washington Avenue, nursing iced teas at Greco’s and beating the machines at the Prima Marina. Offering his immediate friendship to others, Tannar transferred that simple, yet profound, sense of happiness-in-the-moment to each person he met with his warm ceaseless smile, infectious giggle and meaningful hugs. In this, his example is his legacy. It simply wasn’t possible not to feel special when Tannar turned his attention toward you. And that simply, yet profoundly, is what made him special. He is survived by an adoring family which includes his father and mother, Eric and Terri (Raske) Chamberlain of Glen Dale, WV; his twin brother, Micah Chamberlain of Joliet, IL; his paternal uncles Brad, Brent and Todd Chamberlain; and his maternal aunts and uncle Judy Fisher, Kathy Hall and David Raske. In the interest of the community’s continued well-being and safety, private services officiated by Rev. Rodney Hubbs will be held later this week. Tannar will be laid to rest alongside his grandfather and grandmother Joe and Maxine Chamberlain at Halcyon Hills. In lieu of flowers, the family is requesting memorial contributions be made to Marshall County Special Olympics, 710 Hillcrest Lane, Glen Dale, WV 26038 or to your local branch. Sympathies may be expressed online at grisellfuneralhomes.com or via mail to The Chamberlains, 624 6th Street, Glen Dale, WV 26038.

Tannar D. Chamberlain age 46, passed away on Thursday, March 26, 2020 at his home in Wheeling, WV. Tannar was a graduate of John Marshall High School where he took great pride in managing the baseball team that lovingly named him... View Obituary & Service Information

The family of Tannar D. Chamberlain created this Life Tributes page to make it easy to share your memories.

Send flowers to the Chamberlain family.