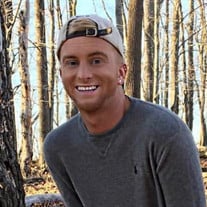 Tanner Gene Young, age 26 of Wheeling, WV died Tuesday, June 30, 2020 in Ruby Memorial Hospital, Morgantown, WV; as the result of an automobile accident. He was born October 12, 1993 in Glen Dale, WV. Tanner grew up loving the sun and the water. He would spend hours and hours in his Aunt’s pool and knew every square inch of it. His older cousins would torture him to get him to stop begging for them to get in the pool and play with him. He always kept a smile from ear to ear through the torture because he knew he could turn that hard NO into a resounding YES. He always did get that final YES and that was half the fun for him. He loved a challenge and had a brilliant mind to be able to overcome it. His later life was full of challenges. He definitely didn’t have it easy, but he kept showing everyone those sparkling white teeth and infectious smile. For every misstep, there was a correction, and a lesson learned. He never lost his zest for life. After years of being unsettled and striving to find a clear direction, he started to settle and find peace from which to plan his future. He found it behind the walls of a Spanish Castle on the side of a hill with a motley crew of characters and his cousin Jeffrey. One of their last conversations was about how excited he was to finally feel like he had a home from which to thrive. They shared that feeling and were always kindred spirits. Their mothers always told them how similar they were; smart, funny, handsome, plus overly dramatic, and mind-numbingly irritating until they got their way... In the end, most of his friends and family had the opportunity to re-kindle their relationships and heal any old wounds and were in very good places. He and his dad’s relationship was healthy and growing. They had been talking about life, the past, and the future. They were in a good place and it was clear that Tanner felt a sense of relief and happiness about it. He was back to his old relationship with his mother and that was a good thing for him too. She would worry about him and he would get annoyed with her worrying though he secretly loved it because it made him feel safe. Although his life was cut far too short and we’ll all miss his enormous smile, hilarious quick wit, and exuberance for life, we have comfort knowing that he left our sides smiling. He was on the right track and excited for the future. He was in a good place with all those in his life and had a settled home. He was happy and thriving and he went out a hero. Three lives were saved with his organs. Three souls that can spend more time with their friends and families because of him. That’s something to be incredibly proud of. After all of the fight and struggle and hardship in his life, it ended with him in the best place he had ever been. He also got one final laugh by almost being late to his own funeral. Well done, Tanner, well done... He was preceded in death by his maternal grandparents, Suzanne Goodhart and Robert Goodhart; paternal grandfather, Gene Young; and uncle, Rocky Young. Survivors include his mother, Tracey (Mark) Lemasters of Moundsville; his father, Randy (Shannon) Young of McMechen; paternal grandmother, Susie Young of Glen Dale; a sister, Bailey Lemasters of Moundsville; a step-sister, Breanna (Mike) Beck of Shadyside, OH; a brother, Maverick Lemasters of Moundsville; a step-brother, Jordan Ferris of McMechen; a niece, Kenlee Beck; a nephew, Brayden Beck; his special friend, Taylor Kobasko of Wheeling; and numerous uncles, aunts, cousins, and many dear friends. The family requests that masks be worn and social distancing guidelines be followed as they receive friends on Monday from 1pm until time of funeral service at 4pm at Grisell Funeral Home & Crematory, 400 Jefferson Ave., Moundsville with Danny O’Neil officiating. Private interment will be held at the convenience of the family. Tanner was a CORE organ donor; as part of a Memorial to him, the family asks that you consider being a donor yourself.

The family of Tanner Gene Young created this Life Tributes page to make it easy to share your memories.

Send flowers to the Young family.