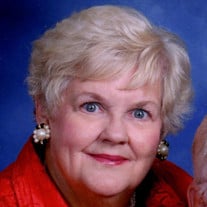 Mrs. Terry Ann Bradley Glover, 76, of New Martinsville, WV, passed away Saturday, January 23, 2021, at her home. She was born August 24, 1944 in Rymer, WV, a daughter of the late Ralph Doyle and Arlene Kiger Bradley. Mrs. Glover was a graduate from Mannington High School in 1962, earned her BA degree in English and speech from Fairmont State College in 1965, and her MA Degree in Counseling and Guidance from WVU in 1970. She taught English at Victory High School in Clarksburg, WV, English and speech at Magnolia High School in New Martinsville, was guidance counselor at Magnolia, and was director of School to Career and Alternative Education for Wetzel County Schools until her retirement in 2000 with 34 years of service. She loved teaching and was a member of New Martinsville United Methodist Church where she helped to establish the Little Lambs Pre-School. Survivors include her loving husband and best friend of 54 years, Edward Glover; her daughter, Holly Ann (Steve) Kocher, of New Martinsville. Her world revolved around her special grandsons, Jared Alec Kocher and Drake Carter Kocher. She never missed attending their extra-curricular and sporting activities. She is also survived by her brother in law, Dan (Sue) Glover of Bridgeport, WV; aunt, Janice Kiger of Mannington, WV; a special cousin, Donna (Roger) Reid Renner of Fairmont, WV; and several additional cousins. Private services will be held at the convenience of the family with burial in Northview Cemetery New Martinsville. Memorial contributions may be made to; New Martinsville United Methodist Church Building Fund 10 Howard Jeffers Dr. New Martinsville, WV 26155. Arrangements entrusted to Grisell Funeral Home & Crematory New Martinsville.

The family of Terry Ann Bradley Glover created this Life Tributes page to make it easy to share your memories.

Send flowers to the Glover family.