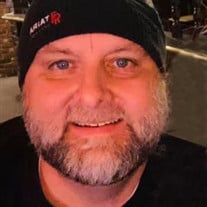 Thomas B. Andrews, age 48 of Moundsville, WV passed away Thursday, October 15, 2020 at WVU-Reynolds Memorial Hospital in Glen Dale, WV. He was born February 3, 1972 in Glen Dale, WV the son of Thomas and Sharon Wellman Andrews. Tom was a manager at Kennedy Hardware and was a member of St. Francis Xavier Catholic Church. He was an avid Bear Archery collector, enjoyed hunting and loved to ride his Harley. He was preceded in death by an infant son, Jake Warren Joseph Andrews. In addition to his parents, Survivors include his wife, Wendy Reilley Andrews of Moundsville; three sons, Eric Andrews of AZ, Thomas Andrews of Moundsville, and Zeke Andrews of Morgantown; a daughter, Gracie Andrews of PA; a step-daughter, Brooke Reilley of Moundsville; a brother, Brett (Chrissy) Andrews of Wheeling; a niece, Taylor Andrews and a nephew, Wyatt Andrews. Family will receive friends on Tuesday from 4pm until the time of the Memorial Service at 6pm at Grisell Funeral Home & Crematory, 400 Jefferson Ave., Moundsville, WV. Funeral Liturgy with Mass will be celebrated on Wednesday at 10am at St. Francis Xavier Catholic Church, 610 Jefferson Ave., Moundsville with Fr. That Son Ngoc Nguyen as celebrant. Interment will be held at the convenience of the family. Memorial contributions may be made to: St. Jude Children’s Hospital, 501 St. Jude Place, Memphis, TN 38105

The family of Thomas Brent Andrews created this Life Tributes page to make it easy to share your memories.

Thomas B. Andrews, age 48 of Moundsville, WV passed away Thursday,...

Send flowers to the Andrews family.