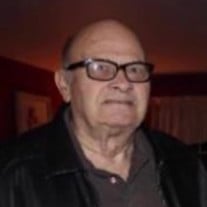 Thomas Linza Gouldsberry age 80, passed away Wednesday, December 3, 2020 at Peterson Rehabilitation Center , Wheeling, He was born July 15, 1940, the son of the late Joseph and Lula Rutan Gouldsberry. He was raised in Cameron, WV by his aunt and uncle, Herbert and Bertie Mathews. Tom was a member of The Middle Grave Creek Church of God, Moundsville, where he served as a worship leader and guitarist for years. He would also go out into the community with Paul Smith spreading music and the word of God. He worked for years at Fostoria Glass and with his own construction company; he will be dearly missed. In addition to his parents, he was preceded in death by his wife, Theresa; and his only son Nathan; and a sister, Charlotte (Norman) Crow. Survivors include his four grandchildren, Helena (Jason) Walters, Amanda Gouldsberry at home, Linzay (Matt) Meyers; of Moundsville and Jonathan Gouldsberry at home; his daughter-in-law Jody Gouldsberry; his great grandchildren, Emilyn Richards, Quentin, Avalyn and Brooklyn Walters and Nathan Meyers; his brother, Joe (Peg) Gouldsberry, all of Moundsville; numerous nephews, nieces, and special cousins. Due to COVID-19, the family will hold a Celebration of Tom’s Life later this spring. Memorial contributions may be made to Middle Grave Creek Church of God, 3185 Middle Grave Creek Rd., Moundsville, WV 26041 for his grandchildren. Arrangements entrusted to Grisell Funeral Home & Crematory, Moundsville.

The family of Thomas L. Gouldsberry created this Life Tributes page to make it easy to share your memories.

Send flowers to the Gouldsberry family.