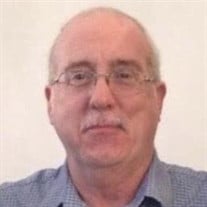 Thomas Marshall Hildebrandt, age 67 of Moundsville, WV died Monday, January 3, 2022 in Ruby Memorial Hospital, Morgantown, WV. He was born December 18, 1954 in Wheeling, WV the son of the late Elmer and Virginia Hickman Hildebrandt. He was a carpenter and plumber with Huffner Contracting, Wheeling; a member of Wheeling Vineyard Church; he could fix and build anything; was passionate about helping others, and dedicated to assisting the elderly and those less fortunate. In addition to his parents, he was preceded in death by a brother, Terry Hildebrandt. Survivors include his wife of 43 years, Cynthia Wolfe Hildebrandt; a son, Kevin (Lauren) Hildebrandt of Cape May, NJ; a brother, Tim Hildebrandt of Martins Ferry, OH; a granddaughter, Graceleigh Hope Hildebrandt; several nieces and nephews; extended family; and Church family. A Memorial Service will be announced at a later date. One of Tom’s greatest joys was being with his little granddaughter, Graceleigh Hope. If anyone would like to acknowledge Tom’s legacy of love, in lieu of flowers, the family has set up a Memorial Education Fund for little Graceleigh, as a gift from her “Pap”. Donations can be made to Graceleigh Hildebrandt, 664 Weeks Landing Rd., Cape May, NJ 08204 with designation “Memorial Education Fund”. Arrangements entrusted to Grisell Funeral Home & Crematory, Moundsville.

The family of Thomas Marshall Hildebrandt created this Life Tributes page to make it easy to share your memories.

Send flowers to the Hildebrandt family.