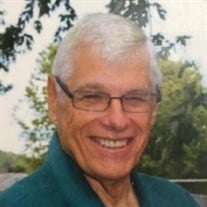 Wayne W. Kaufman, age 78 of Glen Dale, WV died Wednesday, August 26, 2020 in Wheeling Hospital Medical Park. He was born June 26, 1942 in LaJolla, California, the son of the late William and Dorothy Ford Kaufman. He was a retired engineer from the WV Department of Highways, and HDR Consulting; a member of Glen Dale United Methodist Church, where he served as Trustee and Financial officer; a member of Moundsville Lion’s Club; was active with Faith In Action; and was #1 Fan of WVU. In addition to his parents, he was preceded in death by a nephew, Billy DelaGarza. Survivors include his wife of 37 years, Sharon Palmer Kaufman; a daughter, Mandy Kaufman of Wheeling and her fiancé, Jeremy Ward; three brothers, Michael (Jackie) Kaufman of Mio, MI, Ford Kaufman of Alanson, MI, and Jay (Patti) Kaufman of Gladstone, MI; a sister, Laurie Kaufman DelaGarza of Gladstone; several nieces and nephews, Jamie, Lindsey, Luis, Connie, Ryan, Jaylene, Cooper, Cece, and Jackie; and his dog, Rudy. A Memorial Service will be held by the family at a later date. Memorial contributions may be made to Glen Dale UMC, or Faith In Action. Arrangements entrusted to Grisell Funeral Home & Crematory, Moundsville.

The family of Wayne W. Kaufman created this Life Tributes page to make it easy to share your memories.

Send flowers to the Kaufman family.